Marvin: Over. There are only a few teams in the west that could steal extra games from them.

Sean: Over. The maturation of Clint Capela and the presence of James Harden and Chris Paul will prevent Houston from regressing too much after losing Trevor Ariza and Luc Mbah a Moute. Carmelo Anthony is on the roster now, however.

Spencer: Easy over.  Vegas is seriously overrating the loss of Trevor Ariza here.  Expect another over 60 win season.

Marvin: Under. The Warriors will hit right around that projected mark but would most likely take the time to “not rest” their players for the playoffs.

Sean: Under. While The DeMarcus Cousins Show has the potential to stymy ball movement and hinder team chemistry, keeping the entire Big Four – as well as key bench components – should enable Golden State to put together another stellar regular season. That being said, the West is deep and the Warriors will not hesitate to rest, or limit the minutes of, their stars. 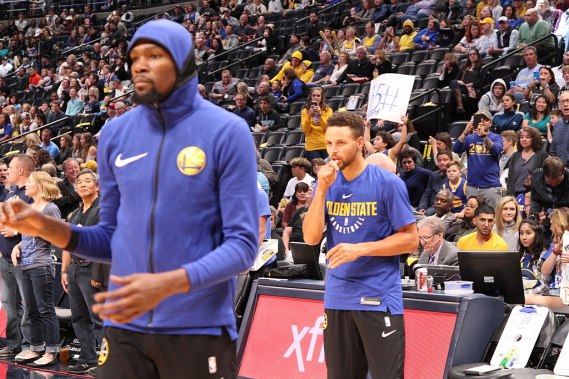 Spencer: Over.  Confusing low-ball by Vegas on this one.  Unless you’re betting on a big trade of one of their two star guards.  The over is easy.

Marvin: Over, but barely. Seems like a make or break year for the two offensive guards. I wouldn’t be surprised if the team is dismantled before the season ends.

Sean: Push. The depth of the West will make it tough for the Trailblazers to stack up as many wins as they did last season – though not impossible. The relationship and on-court dynamic between Damian Lillard and CJ McCollum will be interesting to watch this season.

Marvin: Under. How long will Russell Westbrook’s playing style prevail?

Sean: Under. The West is very deep, Andre Roberson is relatively far away from returning. The team’s additions are intriguing, though not necessarily enticing.

Spencer:  Over.  The Jazz will have amazing team defense if “The Stifle Tower” Gobert stays healthy all season.  Even if Mitchell’s productivity decreases a bit in his second season, their continuity, health, and great coaching will help them improve their record from last season.

Sean: Over. Year 2 of Donovan Mitchell will be very interesting. Will he regress? Will he reach a new height? Either is possible, but it is hard to see a team this talented – with arguably a top-5 head coach – finishing too far south of 50 wins, even when considering the depth of the West.

Marvin: Over. Donovan Spida Mitchell has “it”. Whatever “it” is.

By Ringkøbingfjordjazz – Own work, CC BY-SA 3.0

Spencer: Over.  The Pelicans had a great 2nd half of the season last year after losing Cousins to a torn left Achilles.  His injury allowed them to play much faster, and the addition of Nikola Miritoc allowed them to spread the floor.  Julius Randle could fit into this style as a faster big-man who can beat bigger defenders off the dribble. Otherwise, the Pelicans did not get any better this offseason, especially having to replace Rondo with Elfrid Payton.  The Pelicans will win over 45.5 games because Alvin Gentry has the coaching skills to continue the team’s momentum from last season and Anthony Davis will be gunning for his first MVP trophy.

Sean: Under. Slightly. Any true basketball fan’s heart skips a beat any time they see Anthony Davis land awkwardly or reach for a hamstring. Given his injury history, and the team’s continued lack of perimeter shooting will hurt them. That being said, MVP Anthony Davis could emerge and destroy worlds.

Marvin: Under. AD to the Celtics?

Spencer:  It’s a very tough under.  The much-repeated argument of, “this is the same team as last season but add DeMar DeRozan” is flawed.  Losing Ginobili and Parker means this team is seriously lacking leadership and accountability in the locker room.  The long 2-pointer fest from DeRozan and Aldridge is going to be disgusting and torturous to watch. The Dejounte Murray injury is truly a shame.  Playing an increasingly outdated system with a lack of 3 point shooting and not playing Aldridge at the center is going to catch up to Popovich at some point.  It may be this season.

Marvin: Under. With the athleticism in the West increasing, it will be too much of a load for DeRozan and Aldridge to carry the load.

Sean: Over. While the Spurs will be less threatening during the postseason, Pop and a pissed-off DeMar DeRozan should be able to will the team to at least 45 wins.

Sean: Under. Question marks surround KAT and Andrew Wiggins’ night-to-night effort levels, and the team’s chemistry and composition were off last season. Add Jimmy “Samuel L. Jackson” Butler’s uncertain future with the team and Hollywood-level theatrics, and it’s hard for me to see this team reaching 45 wins.

Spencer:  Under.  The Real World Minneapolis drama has been entertaining but not conducive to good basketball.  Expect too many distractions this season and maybe Thibs getting fired.

Marvin: Under. I am a big fan of the talent that this team has, but they do not seem mature enough to become a force in the West. That feeling of transition seems to loom upon this team.

Spencer: Under.  The Denver Nuggets will certainly make many big and small improvements this season.  Jamal Murray, Gary Harris and Nikola Jokic – who could be an All-Star this season – will all step up their game and their leadership.  Coach Mike Malone will implement new ways to score and maaaybe even improve their defense. The Nuggets will get better in many ways, but in this tough conference, it won’t be their record.

Marvin: Under, but the Nuggets will be a very young team to watch this year. Excited to see them bother some western conference teams.

Sean: Under. The team lacks a truly elite wing and the West is very deep. I don’t expect the Nuggets to make the playoffs.

Sean: Under. The Clippers are gunning for the “Worst League Pass Team” award.

Spencer:  Over.  Throughout the season Tyler Ennis (out of the league now) and G-League call-up Alex Caruso were often used rotation players and towards the end of the season 10-day contract Travis Wear and Derrick Williams type players were relied on for minutes.  Whatever your opinion is of how Stephenson, Rondo and McGee fit into the Lakers roster, at least they’re real NBA players with real career accomplishments. Soon after a Lonzo Ball injury in December, the Lakers had a 10 game losing streak, demonstrating the impact his health could have on the coming season’s record.  Anyone who says Lonzo is a Ball dominant player hasn’t watched him play, and his game will mesh very well with LeBron. Because of injuries, neither Ball, Ingram nor Josh Hart played more than 63 games last season. With a rotation full of actual NBA players, a healthy season, and not to mention Lebron friggin’ James, 49 wins will come easy for the Lakers.

Marvin: Over. Excited to see what James can do in the West. How long will it take for this team to gel?

Sean: Over. With LeBron James running the offense, even I could put up 10 PPG efficiently. Scratch that. I’d average at least 15.

Sean: Under.  Intriguing pieces but little hope of even cracking 30 wins in the West.

Marvin: Under. Lack of team direction. Top 3 pick for sure next draft…in 2020.

Spencer: Under.  Doncic will be very fun to watch and Jordan is the center this team has needed for a while but an 11 game improvement is too much to ask for.  Expect Doncic, Smith Jr. and the team to have flashy highlights along with ups and downs throughout the season.

Marvin: Under. Looking for that next talent to replace Dirk in the off-season. Doncic to DJ will be entertaining nonetheless.

Sean: Under. I think they’ll be close, but just not enough on the roster for even a coach as good as Jim Carrey.

Spencer: This is the easiest over of all 30 teams.  Conley and Gasol led this team to between 41-56 wins for eight straight seasons.  An under 33.5 prediction is relying on more unlucky injuries or for the team to blow up the roster.

Marvin: Over, but not by much.

Sean: Over. But only because of Slow Mo.

Marvin: Over with that 30. Looking forward to seeing a much more organized Suns as well as the added pressure to find a better PG makes this season much more interesting. No bias.

Spencer: Yeah, that’s gonna be an under for me dawg.

Sean: Under. Related: We need to get Trevor Ariza on a contender.

Come back to Planet FOMO to see our NBA Eastern Conference over/unders roundtable early next week!