It’s been thirty years since the Permian Panthers failed to clinch the Texas state championship game and their story still ripples through pop culture. There is the book, a movie, and a five-season TV series that followed shortly after. A fair amount of people only know the latter, unaware of the movie, not to mention the four-hundred-page book, the spark. The story is an emotional, American sports spectacle, an immediate and urgent classic. While the movie’s tagline is Hope Comes Alive, the true relevance resides in the subtitle of the book, A Town, A Team, A Dream, specifically the biopsy H.G. Bissinger performs on Odessa, on race, obsession, and football in America.

The prologue of Friday Night Lights follows Boobie Miles, star running back, and his knee, which hangs in the balance. The delicate interchange of tendons and cartilage, still gummy and raw from an injury and arthroscopic surgery, bears the weight of the upcoming season and his future. While the reader is introduced to other characters including Coach Gary Gaines, linebacker Ivory Christian, and quarterback Mike Winchell, Boobie Miles does not settle in the back of the mind. We have to remember that this is Texas—West Texas ‘88—under Reagan, under God. Confederate flags crack in the stands and Boobie Miles, local celebrity and Permian Panther highlight reel, is a hard hit away from being another slur in a red state.

Odessa, TX has a familiar, dark history: laws banning interracial intercourse, deed restrictions on whites selling their homes to blacks, etc. Black on one side of town and white on another; full integration feels impossible. Bissinger notes even the music in the locker rooms has a dichotomy: Bon Jovi for the white players, Public Enemy for the black players. But there’s progress, right? Football plays a unique role, a place where black athletes are equal on the field, if only for a few hours.

An oil boom in the seventies led to a lot of fast money in Odessa and spawned a level of disillusion. It is still very much a desperate town in the heart of West Texas, and obsession is the close cousin of desperation. Bissinger never ceases in his honest characterization, portraying the town’s pressure on its youth to lift them all from their everyday mediocrity, our largest fear. The vicarious obsession runs. They infiltrate the politics, gerrymandering for black athletes against Odessa High. They charter a private a jet to a game across state. It is not hard not to imagine Odessa surrounded by sand, by wasteland, on a desert island where a mad tribe turns oil into money and boys stomp around like gods.

However, Bissinger shines luminously on the field, in the locker room, and in the classroom. While we see Odessa, its history and economy, the story is nothing without its players. There’s Mike Winchell trying to play in college, Brian Chavez star player and valedictorian, Don Billingsley trying to live up to the reputation of his father, Ivory Christian brooding whether this is all worth it in his four high school years. Bissinger sums it up best: “He knew that no candle burned out more quickly than that of the high school athlete.”

We return to Boobie. One winces looking at a chapter titled “Boobie Who?” and we know the agony of a has-been at eighteen years old. A boy who was a football player, and is now just a boy trying to figure out what to do with his life. This is not Remember the Titans, there are not always happy endings.

In the end, the Permian Panthers can’t pull it off against Carter in the semifinal game. I have seen the movie a handful of times, read the book, and watched the movie again and again. Every time I think—I hope—they’ll get those yards, those TD’s, and bring glory back to the small oil town. My heart bleeds for those Winchell, Christian, Chavez, and Billingsley, boys now men my senior. What can a bunch of high school kids tell us about America? There’s grit and hope and lessons to be learned, sure, but football is the medium. Friday Night Lights will go on because it does what any good sports story should do, transcend the field and talk about enduring themes of race, obsession, and of course, its spectators. 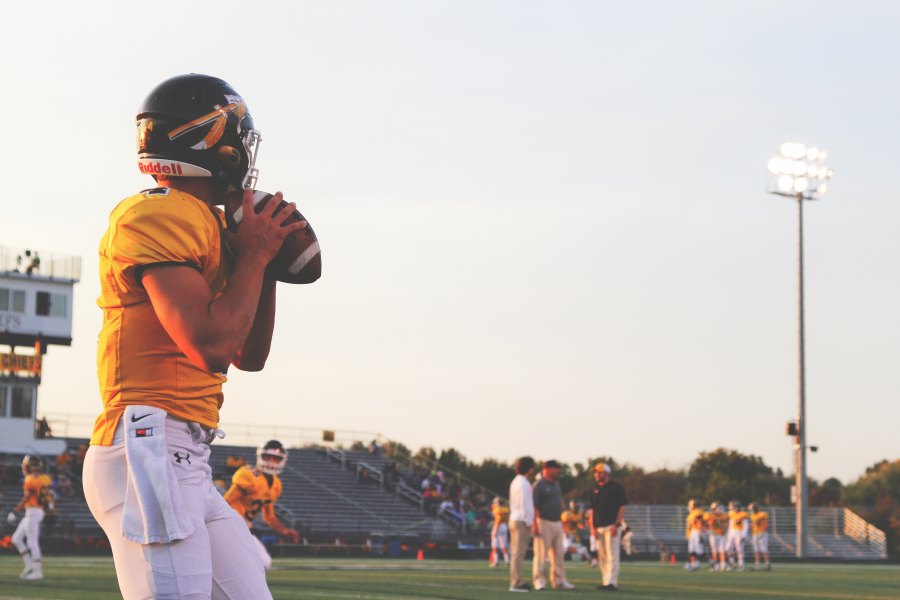 One thought on “The Enduring Friday Night Lights”