A couple decades from now you might find yourself stranded on Planet FOMO burning your tongue on nuked hot pockets, sitting in an uncomfortable desk chair in a dingy and dimly lit apartment late on a Friday night scrolling through NBA basketball forums reading strangers arguing with each other over what the legacies of past NBA players should be.

Perhaps on this night, you might come across an especially testosterone-fueled thread on the legacy of Dwight Howard. The 16-year-old who started this thread never had to live through each and every crushing disappointment of seasons two through six of Lost, nor of Howard’s career. The kid will argue that Howard’s individual accomplishments (8-time all-star, 3-time Defensive Player of the Year, 8-time All NBA team, 6-time rebounding leader etc.) must mean he’s an all-time great. It must mean he belongs on the Mount Rushmore of big men next to Kareem, Shaq, and Bill Russell. The kid concludes in typical Internet forum fashion that anyone who thinks otherwise is “irrational,” and of course, that any opposing arguments are “laughable.”

A couple weeks earlier on the forum, you misspelled the word “laughable” and they all made fun of you. Now’s your chance of a lifetime to make an internet forum power play and make up for lost ground. You recall the details of an article you read on planetfomo.com, and get ready to show that kid who’s really being irrational.

You plan to explain that the individual accomplishments of Howard were hollow and that he actually had very little impact on his teams winning. His ability to be so despised by so many players, coaches and staff in the league was unparalleled, and his inability to mesh on the court with some of the league’s actual all-time greats was at times incomprehensible.

To back up your argument with #factsonfacts, you delve into all of the places Dwight Howard has sucked as a teammate. It all started in Orlando…

One of the most amusing moments in NBA history happened between Dwight Howard and his coach Stan Van Gundy in April 2012. The Office (British or American) could not have scripted a more cringe-inducing scene. Well-respected future Hall Of Fame, Orlando Magic coach Stan Van Gundy responded to reporters inquiring on a rumor that Dwight Howard had demanded to Magic ownership that Van Gundy be fired (which he reportedly did repeatedly during the halftimes of games). “I know he has,” Van Gundy confirmed, “I’ve been dealing with this all year.” Van Gundy explains that ownership has informed him of the fact and he tangents on how he’s actually more or less at peace with the situation with exception to one behavior he is “uncomfortable” with: “bullshit.”

Right on cue, Dwight Howard waddles into the picture and puts his sleeved arm around Van Gundy, completely oblivious of what his coach had just explained. Van Gundy tenses up as if the previous evening’s Taco Bell just kicked in and after a few gloriously awkward exchanges with Howard he B-lines straight through the crowd of reporters. Howard is now center stage with 16 bullshits in the clip and one in the hole. He proceeds to spray bullshits everywhere like he’s bullshit Rambo.

For the rest of our lives here on planetfomo.com we hope never again to see a grown man with such a pathetic performance, on or off the court.

After being on the fence for a couple seasons, Howard forced his way out of Orlando and on to his next adventure.

Howard’s immaturity during the American team’s 2008 Olympic run proved to be enough of a burden that Olympic basketball admins were relieved he would not be able to attend the 2012 Olympics due to injury. According to Bill Simmons (of Grantland at the time) one Olympic admin reportedly said, “we won’t have to babysit him now.”

Howard’s refusal to take anything seriously rubbed several Olympic teammates the wrong way. One teammate being Kobe Bryant who had such a bad first impression of Howard he was not on board with a Howard-to-Lakers trade four years later.

Howard demanded the Orlando franchise trade him to a big market city. His wish was granted and then some. Los Angeles provided not only a big market but also a chance to play for one of the two most successful franchises in basketball ever, and a chance to play with Steve Nash, Kobe Bryant, (combined 5 season and finals MVPs) future Hall of Famer Pau Gasol, and a roster full of more than solid role players. The ceiling was a championship.

Kobe Bryant’s first impression of Olympian Howard proved correct. Bryant explained that Howard was non-committal to winning and had a committal to an annoying and unnecessary “outgoing, very gregarious” personality.

The conflict was not just a difference in locker room culture, and we saw Howard complain on the court throughout the season about teammates not passing to him. Here he is arguing with one of the greatest passers ever about whether or not he was open:

Steve Nash (a very reasonable fellow) reflected on his year with Howard with Bill Simmons. Nash explains that Kobe Bryant would admit that Bryant can have an uncompromising personality, however, Howard chose to stay in a babyish, “I don’t like it mode” all season instead of having any productive attitude about it.

Howard reportedly called friends during halftimes of Lakers’ games to ask what they thought of his performance. He was clearly looking for the validation of yes-men instead of the knowledgeable guidance of Hall of Fame coaches and teammates.

Mike D’Antoni (future Hall Of Fame Coach) had a vision for the Lakers roster that was ahead of his time. He wanted to spread the floor with shooters and playmakers to bring defenders away from the basket creating open drives or open outside shots. An important character of this plan was a Nash-Howard pick and roll, which D’Antoni wanted to be a “staple.” He and Nash explained that Howard refused to accept his role in this vision. For whatever reason Howard did not like pick and rolls and wanted to do the opposite of spread the floor and instead wanted to play an outdated Wilt Chamberlain style of play where the entire offense ran through him in the post.

D’Antoni saw the irony in Howard’s 2013 next free agency decision to join the Rockets. A team that ran the exact style of play he disliked so much as a Laker.

Now Dwight Howard was to be a paired with James Harden, a ball-dominant scorer like Bryant, but far less abrasive and type-A. Nevertheless, Howard and Harden’s relationship was “cordially bad” at best.  Incoming Rockets players were advised to pick a side between Harden and Howard early on.

Yet again, beyond personality clashes, Howard’s on-court demands lacked self-awareness. Instead of future MVP and statistically one of the greatest scorers of all time James Harden, Howard wanted the offense to be run through him. He often complained publicly about James Harden over-dribbling and not passing to him. To further prove his stubbornness, he was reluctant or refused to play what could have been the most efficient pick and roll performances in league history.

In an ESPN interview with Jackie MacMullan, Howard admitted to at some point in his Rockets tenure to going to the office of Daryl Morey (arguably currently the best and most respected GM in the NBA) and telling Morey that he doesn’t know how to be effective at basketball, unlike himself. During the same interview, Howard admitted to not shooting jumpers because he’s too painfully afraid of missing them.

The pitch for Howard’s success in Atlanta was that it was his homecoming. Back where he was born and raised maybe he would get back to his roots and regain the work ethic and humility needed to succeed.

Howard’s Hawks teammates reportedly “cheered in jubilation” when they found out Howard would be traded away.  One reason was that Howard would give long preachy speeches in the locker room before games about playing hard and moving the ball around, which translated on the court to him not playing hard and complaining about not getting passed to.

Here’s Howard and a teammate arguing with each other while leaving Steph Curry open for a three:

The pitch for Howard’s success in Charlotte was that Hornets head coach Steve Clifford was supposed to be the Dwight Howard whisperer. Clifford was on the coaching staff with Howard in Orlando and in Los Angeles and supposedly knew how to communicate with him effectively.

But Howard persisted with the corny speeches, lack of effort and the demands for the ball.

Spencer Haywood, a former teammate of many current Hornets went on NBA TV Radio the morning after Howard’s trade out of Charlotte. He explained that many Hornets players were happy about he news of Howard’s trade and “sick and tired of his act”

That brings shame to the sixth degree to the Washington Wizards who already had their fair share of locker room drama last season. Maybe Howard will take things a bit more seriously this time around? 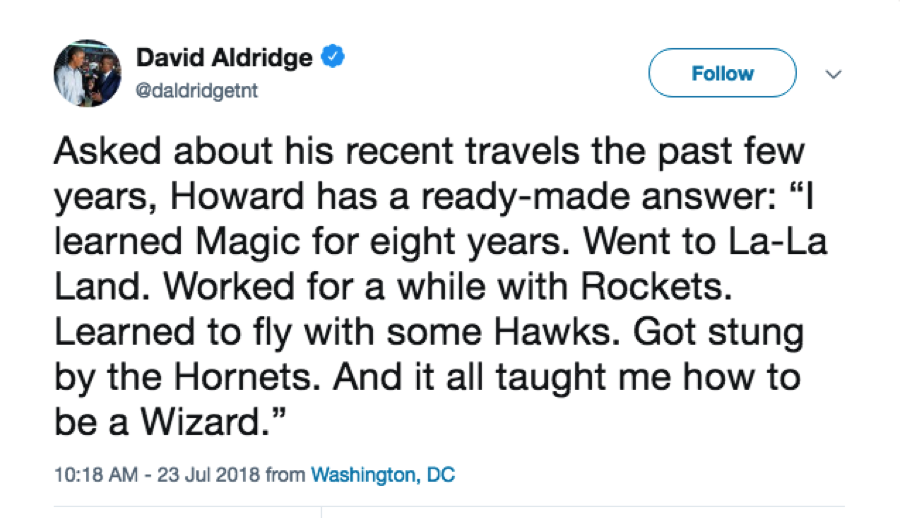 One thought on “Tears Of A Clown: A Dwight Howard Story”